In August, 1900, two local prospectors, Jack Smith and Clarence Warner, spotted a green patch of hillside that looked like good grazing for their pack horses. The green turned out to be copper ore — a whole mountain of it! They had discovered a “bonanza” of copper. Together with nine friends, the two formed the Chitina Mining and Exploration Company.

Shortly after this, a U.S. Geological Survey geologist made an independent discovery of what was to become the Bonanza Mine. A sample analysis of the ore found it contained 70% copper, fourteen ounces of silver per ton, and traces of gold. The only obstacle to great wealth for all was the almost total inaccessibility of the mines. Stephen Birch, a mining engineer fresh from school back east, was in Valdez when members of the Chitina Mining and Exploration Company arrived in the fall of 1900 with news of their find. Birch, who had wealthy connections in New York City, bought out the prospectors for $275,000. Initially, loads of copper ore were taken out by pack horses on a trail to Valdez. Within twenty years, the strike proved to be the richest known concentration of copper in the world. 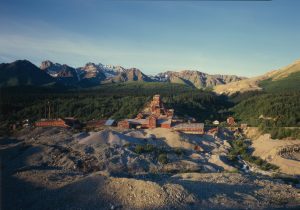 The discovery of these vast quantities of copper led to the biggest construction projects ever undertaken in the Alaska Territory: the Copper River and Northwestern Railroad, the Kennecott mines, and the mining town of Kennicott. (An administrative error led to differences in spelling:  the spelling of the mines and mining company is “Kennecott;” the spelling of the town is “Kennicott.”) Whole fortunes were won and lost over the Kennecott copper, which involved the notorious “Alaska Syndicate” and political battles which raged to the offices of conservationist Gifford Pinchot and President Teddy Roosevelt. Capital for the projects was assured when the Guggenheims and J.P. Morgan bought in and formed the Kennecott Copper Corporation. 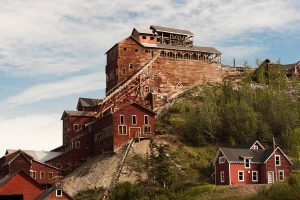 In 1907, surveys were begun for a railroad from the Kennecott mines to Cordova. It took thousands of workers four years to lay the rails along the 195 mile route, which skirted glaciers, bridged canyons, and crossed deep snow and avalanche country. The total cost of the railroad was $23,000,000. The final “Copper Spike” was driven in 1911, and cars of ore were soon being shipped to Cordova to help satisfy the nation’s growing demand for copper.

There were four Kennecott mines: Bonanza, Jumbo, Mother Lode, and Erie. Bonanza was the only open pit method mine at Kennecott. Bonanza and Jumbo are both located at approximately the 6,000 foot level on the mountain, about three miles from the town of Kennicott. In 1914, the two were connected by an underground crosscut. Jumbo had three two-story barracks housing 80 men each, a cook house, boiler shack, and gymnasium, all build on a glacier with only one corner on solid ground. The Mother Lode was located on the other side of the mountain from Kennicott, and also had a crosscut with Bonanza. Erie was perched on the mountain about four miles up the Root Glacier from Kennicott; it was shut down in August, 1917. Supplies and mail were delivered by tram to the mines several times per week. Ore was shipped to the processing facilities in Kennicott via the trams. 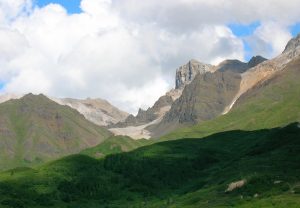 In 1907, the Alaska Syndicate began construction in the mining town of Kennicott, hauling in supplies by sled during the winter months. The Company office was built of logs, with subsequent buildings of more conventional frame construction painted the company colors, deep red with white trim. By 1908, with the construction of the railroad to the Chitina River, supplies could be shipped upriver and transported by rail. In 1911 shipment of ore began.

The dominant building in the Kennicott skyline is the ore concentrator building, begun under the administration of Superintendent L.A. Levansaler in 1910. It grew from an original building 44 feet wide and six stories tall with a capacity of 100 tons per day, to a final capacity of 1200 tons per day in a building approximately twice the size of the original.

By 1916, the ammonia leaching plant was in operation, and the town included a manager’s house, mess hall, hospital, recreation hall, five-unit apartment building, barn, and guest house. A 16,000 foot aerial tramway, and a gigantic power plant were also constructed. Dormitories, machine shops, family housing, and stores were constructed later, as well as a tennis court and movie house. A two-room school was constructed, where two teachers taught eight grades. 17 Silk Stocking Row was one of three cottages built in 1918 for managers; it was home to Chris Jensen, the head carpenter. The company, ever mindful of fire, located fire hose houses throughout the town. Over 250 people, including twenty families, lived in the company town of Kennicott.

Hundreds more people lived in McCarthy, five miles away. McCarthy was a wide-open frontier town of miners and railroad men where hotels, saloons, and brothels prospered. Miners could buy beer in whiskey glasses for 50 cents and watered whiskey for a dollar. As one old-timer said, “If we got any change from a ten dollar bill, it’s because they thought we were still sober.”

By the 1930’s, the high grade ore had played out and the mining company decided to close down. The mines were closed in 1938 after producing more than $200,000,000 in copper and $100,000,000 in profit. The last train left Chitina on November 11, 1938, and Kennicott became an instant ghost town. In the 1940’s and 1950’s, Kennicott was deserted. In the late 1960’s, the Consolidated Wrangell Mining Company used Cl-119 “Flying Boxcars” to transport additional ore, but the high costs involved in this operation made it unprofitable.  The town was again deserted until 1976, when many buildings (including 17 Silk Stocking Row) were purchased.  Here’s what the town looked like in 1977-78:

There are fifty original Kennecott Copper Company buildings in town, painted in red with white trim. The National Park Service has renovated many of the buildings, while others are still in their original state.  The “skyline” is dominated by the 14-story ore processing building. Other large buildings include the ammonia leaching plant and power plant. Aerial tramways transported the copper ore from the mines above, and are still standing. Tours of the buildings and town are available.